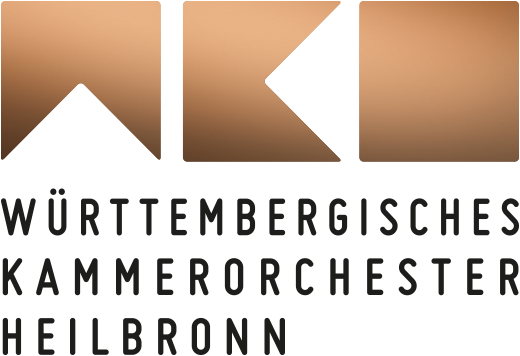 Welcome to the Württemberg Chamber Orchestra Heilbronn. On the following pages you can find information about the Chamber Orchestra which has been founded in Heilbronn 60 years ago, but whose music can be heard in concert halls around the world. The homepage provides information about the orchestra, its history and its principle conductor. You can also find all concerts and projects. Due to technical reasons, the English version is not as detailed and frequently updated as the German version. However, if you have any further questions, we will be pleased to assist you at anytime.

"The Württemberger are among the top ensembles in Europe, they truly play with virtuosity". Frankfurter Neue Presse

Carried by the passion, quality and inspiration of its members, the name Württemberg Chamber Orchestra Heilbronn (WKO) stands for an energetic style of music-making and a distinct individuality of orchestral sound. These, along with the competence of sensitive accompaniment, which is highly valued by many soloists, are the guarantors of the orchestra's international success story.

The WKO is a welcome guest at important international venues - recently at the Concertgebouw Amsterdam, the Queen Elisabeth Hall Antwerp, the Cologne Philharmonie, the Elbphilharmonie Hamburg and the Rheingau Music Festival. In terms of touring activities, a concert tour to South Korea is on the calendar for the 2022/23 season.

The WKO has had a significant influence on the musical life of its home region. Its own subscription series in Heilbronn and Ulm as well as regular music theatre productions with the Heilbronn Theatre document this. In addition to innovative concert formats - most recently an evening with poetry slam and orchestral music - the WKO presents its imaginative music education programme "InEar" for all ages, as well as a chamber music series conceived by the orchestra members themselves. Among the special crowd-pullers are open-air concerts. Particularly noteworthy are the performances at the Heilbronn Federal Horticultural Show 2019 or the regular participation at the Heilbronn Classic Open Air. The WKO's spectrum is rounded off by its regular recording activities, with more than 500 recordings to its credit. The WKO received the renowned ICMA 2022 for the recording of works by Nikolai Kapustin with the pianist Frank Dupree.

The WKO is an ensemble that makes music at the highest level. It has the ability to unfold orchestral splendour as well as the chamber music virtues of listening to each other. The latter also enables performances in which the orchestra is conducted from either the soloist's or the concertmaster's podium.

The WKO is the life's work of conductor Jörg Faerber. He founded the orchestra in 1960 and led it to international renown. Jörg Faerber and his visionary work were followed in 2002 by the Armenian-born conductor Ruben Gazarian. With Gazarian, the orchestra's repertoire was significantly expanded - a line that his successor, the American Case Scaglione, who has been the orchestra's principal conductor since the 2018/19 season, has consistently pursued.

“Listening to the Württemberg Chamber Orchestra Heilbronn (…) is pure joy. (…) the compelling characteristics of this ensemble: agile music-making, combining esprit with clear, intelligible contours, and on top of that, a warm sound whose intensity should not be taken for granted in a chamber orchestra.”
SÜDDEUTSCHE ZEITUNG, April 2018

“The orchestra from Württemberg is among the leading ensembles in Europe, and its playing is truly virtuosic.” Frankfurter Neue Presse, March 2018 “Case Scaglione is relaxed, likeable, unpretentious, reflective, clear-cut – and obviously highly inspiring and demanding of his musicians. This made his debut in Ulm a veritable experience: Arnold Schoenberg’s Verklärte Nacht for string orchestra – latest romanticism, Secession, lots of Wagner echoes, ecstasy, art. And this Richard Dehmel poem about the “sinful love of a woman” as the inspiration for passionate sound-painting. Surely this performance of “Transfigured Night” should not be glorified: but the WKO, led by concertmaster Zohar Lerner with a most expressive violin sound, has rarely played so intensely, so colourfully in Ulm. The listeners could close their eyes for half an hour and delve into Vienna around 1900.”
SÜDWESTPRESSE

”The young maestro on the podium, Case Scaglione, was flexible and empathetic with the Württembergisches Kammerorchester. The ensemble from Heilbronn, which sees itself as an “international sound manufactory” and travels a lot, was then able to show its own profile in Beethoven’s “Pastorale”. Chief Conductor Scaglione, Associate Conductor of the New York Philharmonic Orchestra, unites American looseness with a highly sensitive musicality. Although he bought the intimacy of his interpretation of Beethoven with extreme pianissimi and much ritardandi, he brought the sound culture of the orchestra to best advantage. “Case Scaglione conducts his WKOmusicians mostly by heart, with small, smooth but clear gestures, full of energy and with impulse”
HEILBRONNER STIMME, SEPTEMBER 2018